Photos and story written by USSA.

PARK CITY, UT (July 6, 2015) - Watch out for a new top dog on the slopes this season. The U.S. Ski and Snowboard Association (USSA) has welcomed the newest member of its Olympic-bound teams: Champ. The lovable chocolate lab is taking over as the official mascot of the U.S. Ski Team, U.S. Freeskiing and U.S. Snowboarding.

Champ is a five-month-old rescue puppy from the Humane Society of Utah, an open-admissions shelter that saves the lives of over 10,000 animals a year. This year, that number included Champ, who was surrendered by a family that could not take care of him.

​​
Champ shows off his Team USA pride, as he gets ready for the 2018 Olympics in PyeongChang.

"We are tremendously appreciative of the partnership with USSA. Champ will be an incredible ambassador for the winter sport industry and we couldn't think of a better spokespup to help promote the ‘Adopt, Don't Shop’ message,” said Heidi Myers, Humane Society of Utah’s Corporate Partnership Manager. “Champ will also help to dispel the myth that companion animals finding themselves in a shelter are bad, unwanted pets. Shelter pets are typically given up due to no fault of their own and are simply waiting for the family that compliments them perfectly. Congratulations to Champ and USSA—we can't think of a more unbeatable team!"

Champ will prepare for the PyeongChang Olympics in the upcoming seasons, watching and learning each sport. This summer, he’ll start by running behind roller skiing cross country skiers, biking behind the alpine athletes, bouncing on trampolines with snowboarders and freeskiers and watching the freestyle team soar off water ramps. This winter, he’ll cheer his teammates on at U.S.-based events, where fans will have an opportunity to meet and get a picture with him.

"It's amazing to see USSA bringing in a rescue dog as the team mascot,” said Olympic silver medalist Gus Kenworthy, noted for rescuing dogs at the 2014 Winter Olympics. “Obviously I'm a big supporter of adopting animals and Champ is the perfect addition to the USSA family!"

​​
Champ already made his first steps into the winter sports world—roaming USSA’s Center of Excellence gym to get his belly scratched by athletes, including three-time Olympian Stacey Cook. 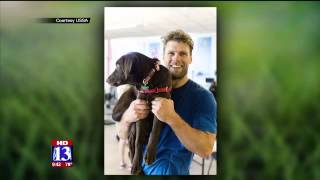